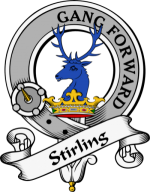 Thoraldus was born before 1147 – probably ca 1070-1090 – the son of Sweyn Thorlongusson and grandson of Thorlongus Leofwinson. The Sheriffs of Stirling, afterward Stirlings of Cadder and Ochiltree, and their representatives, come from this man.

Thoraldus was a Saxon noble, one of the ‘distinguished strangers from the south’, who were brought by king David I ,the youngest son of Malcolm Canmore III and Saint Margaret (sister of Edgar Ætheling), to civilize Scotland; from the names of the other witnesses to David’s charter, Thoraldus must have been a person of the highest rank. John bishop of Glasgow one of these witnesses having died in 1 147 according to the Chronicles of Melrose and Holyrood Toraldus thus flourished at that early date He was named in a charter by David I, granting to Kelso Abbey a salt pit in Carsaak, dated “apud Strivelin.”

John, bishop of Glasgow, one of these witnesses, having died in 1147, according to the Chronicles of Melrose and Holyrood, Thoraldus thus flourished at that early date.[1. The Stirlings of Craigbernard and Glorat. Page A.]

In the Chartulary of Kelso there is a charter by David I, “to the abbey of Kelso, of a salt-pit in Carsaak, dated “apud Strivelin” which is witnessed “Roberto Sancti Andrea Episcopo; Johanne, Glasguensi Episcopo, Edwardo Cancellario; Duncano Comiti; Herberto, Camerario; Toraldo, Vicecomite; Alwino MacArchile, Uctredo filio Fergusii. All the above witnesses were persons of the highest rank and consideration, holding great public offices; and besides the first two Bishops of the Kingdom, the Chancellor, and Chamberlain, there is Duncan, Earl of Fife, Alwin MacArchile, held by antiquarians to be ancestor of the Earls of Lennox, and Uchtred, son of Fergus, the Lord of Galloway. Thoraldus is held to have been a Saxon chief or leader, whom, with various Saxons, Normans, and Strangers, David I, during what Chalmers styles the Scoto-Saxon period, imported into Scotland to colonize and civilize it.
From the date of the above charter at Stirling, taken with what will follow, we may conclude that the Sheriffdom he undoubtedly held was that of Stirling. This charter must have been signed in or before 1147, that being the year when , according to the “Chronicles of Melrose and Holyrood” John, Bishop of Glasgow, a witness thereto, died.[2. The Stirlings of Cadder & Dumpellier Page 13]

See the article on Clan Stirling Online! about The Seal of Thorlongus
Thorlongus was the grandfather of Thoraldus

Note: Recent Y-Chromosome DNA testing has shown that one group of Stirling test results are Haplogroup I with DYS values pointing to a Saxon heritage. This is consistent with Thoraldus’ Saxon heritage.
Join the St*rling DNA Project 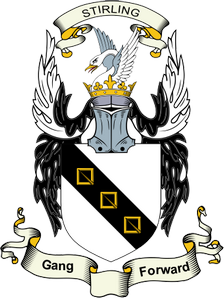 First Arms of the Stirlings of Cadder 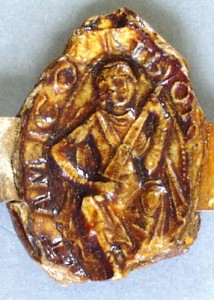