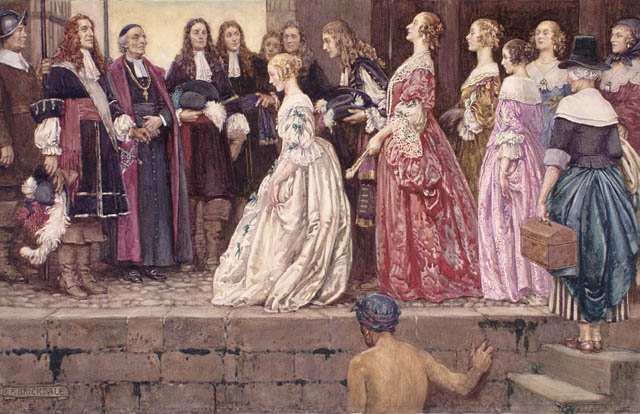 Between 1663 and 1673, 768 Filles du Roi or “King’s Daughters” emigrated to New France under the sponsorship of the French government as part of the overall strategy of strengthening the colony until it could stand on its own without economic and military dependence on France.

In 1663, about 2,500 colonists lived in New France, for the most part on the north shore of the Saint Lawrence between Québec and Montréal. With a constant threat from the Iroquois and the more populous English colonies on the Atlantic coast, the need to populate New France became a growing concern for Louis XIV and his colonial advisors. Through the early 1670s however, men of marriageable age far outnumbered the women of marriageable age. Unable to find a wife in Québec, a great number of male immigrants returned to France after their three-year term of service expired.

Between 1634 and August 1663, while the colony was governed by the Compagnie des Cent Associés, about 262 filles à marier (marriageable girls) were recruited by individuals or by private religious groups who paid their travel expenses and provided for their lodging until they were married. But individual recruiters and private organizations had little success in enticing single women to emigrate to New France, and fewer than ten filles arrived in the colony in most years. In 1663, the King took over direct control of the government of New France and initiated an organized system of recruiting and transporting marriageable women to the colony. On September 22, 1663, thirty-six girls –the first group of Filles du Roi– arrived in Québec.

The recruiting of Filles du Roi took place largely in Paris, Rouen and other northern cities by merchants and ship outfitters. A screening process required each girl to present her birth certificate and a recommendation from her parish priest or local magistrate stating that she was free to marry. It was necessary that the girls be of appropriate age for giving birth and that “they be healthy and strong for country work, or that they at least have some aptitude for household chores.”

The cost of sending each Fille du Roi to New France was 100 livres: 10 for the recruitment, 30 for clothing and 60 for the crossing itself –the total being roughly equivalent to $2,020 in the year 2015.((Edited 2016/3/24 for latest value)) In addition to having the costs of her passage paid by the state, each girl received an assortment of practical items in a case: a coiffe, bonnet, taffeta handkerchief, pair of stockings, pair of gloves, ribbon, four shoelaces, white thread, 100 needles, 1,000 pins, a comb, pair of scissors, two knives and two livres in cash. Upon arrival, the Filles received suitable clothing and some provisions.

All of the Filles du Roi first landed at Québec City where 560 remained, with 133 being sent to Montréal and 75 to Trois-Rivières. While awaiting marriage, they were lodged in houses in dormitory-style settings under the care of a female chaperone or directress where they were taught practical skills and chores to help them in their future household duties. Suitors would come to the house to make their selection, and the directress would oversee the encounters.

When selecting a Fille du Roi, the suitor looked beyond outward appearances and considered the practical attributes of a bride that would be adapted or disposed to the rigors of the colony. The preference seems to have been for peasant girls because they were healthy and industrious, as opposed to city girls who were often considered lightheaded and lazy. Marie de l’Incarnation, mother superior of the Ursuline convent at Québec City and one of Québec’s early female founders, requested in 1668: “From now on, we only want to ask for village girls who are as fit for work as men, experience having shown that those who are not raised [in the country] are not fit for this country.”

Every Fille du Roi had the right to refuse any marriage offer that was presented. In order to make an informed decision to accept a would-be husband, the girls asked questions about the suitor’s home, finances, land and profession. Having a home of one’s own was one of the most important considerations for a Fille du Roi. According to Marie de l’Incarnation, “The smartest [among the suitors] began making an habitation one year before getting married, because those with an habitation find a wife easier. It’s the first thing that the girls ask about, wisely at that, since those who are not established suffer greatly before being comfortable.” After agreeing to marry, the couple appeared in front of a notary to have a marriage contract drawn up, and the wedding ceremony generally followed within 30 days. For the Filles du Roi, the average interval between arrival and marriage was four to five months, although the average interval for girls aged 13 to 16 was slightly longer than fifteen months.

In addition to any dowry of goods that the bride may have brought with her from France, each couple was given an assortment of livestock and goods to start them off in married life: a pair of chickens and pigs, an ox, a cow and two barrels of salted meat. The King’s Gift of 50 livres is believed to have been a customary addition to the dowry, but only 250 out of 606 known marriage contracts make reference to an additional dowry given by the King. Once married, there was an incentive to have large families. A yearly pension of 300 livres was granted to families with ten children, rising to 400 livres for 12 children and more for larger families.

In November 1671, Intendant Jean Talon in a letter to the King wrote that the birth of six to seven hundred babies that year confirmed the fertility of the country. He predicted that “without further help from the girls from France, this country will produce more than one hundred marriages in the first few years and many more after that, as time goes by.” Talon advised that it would not be necessary to send more girls the next year in order for the colonists to more easily give their daughters in marriage.

In 1672 France and England declared war on the Dutch republic, requiring a great deal of the attention and finances of the French government. The French authorities decided it was too costly to continue sending Filles du Roi and unnecessary since the colony’s own population could provide a sufficient number of marriageable women. In September 1673 the last shipment of Filles du Roi arrived from France, and the program ended. The population of New France had risen to 6,700 people, an increase of 168% in the eleven years since the program had begun. Although the Filles du Roi represent only 8% of the total immigrants to Canada under the French régime, they account for nearly half of the women who immigrated to Canada in the colony’s 150-year history.
((Source: King’s Daughters and Founding Mothers: The Filles du Roi, 1663-1673 by Peter J. Gagné. Pawtucket, RI: Quinton Publications, 2001. pp 15-42))